Third year for YIPP people to join the Gamejam and in that spirit we ended up having 3 separate teams as well.

Going to a site with 13 people is quite a stretch, so we decided to make our own site. After a short talk with the Wouters, it was decided to hold the GGJ 2020 at YIPP itself. YIPP even took care of food and drinks! (Big props for that).

After 4:30 we began to kick out the rest of the team, to make space for the jam. As soon as the non-YIPP jammers arrived we started with the presentation. We’ve added some extra YIPP diversifiers to the bunch, and got the organisational stuff out of the way to begin with the official GGJ presentation. With great power comes great responsibility, which we ended up mis-using: Being in control of the presentation, we democratically decided to not go through the large amount of the sponsor- and the intro-videos and skipped directly to the good stuff. 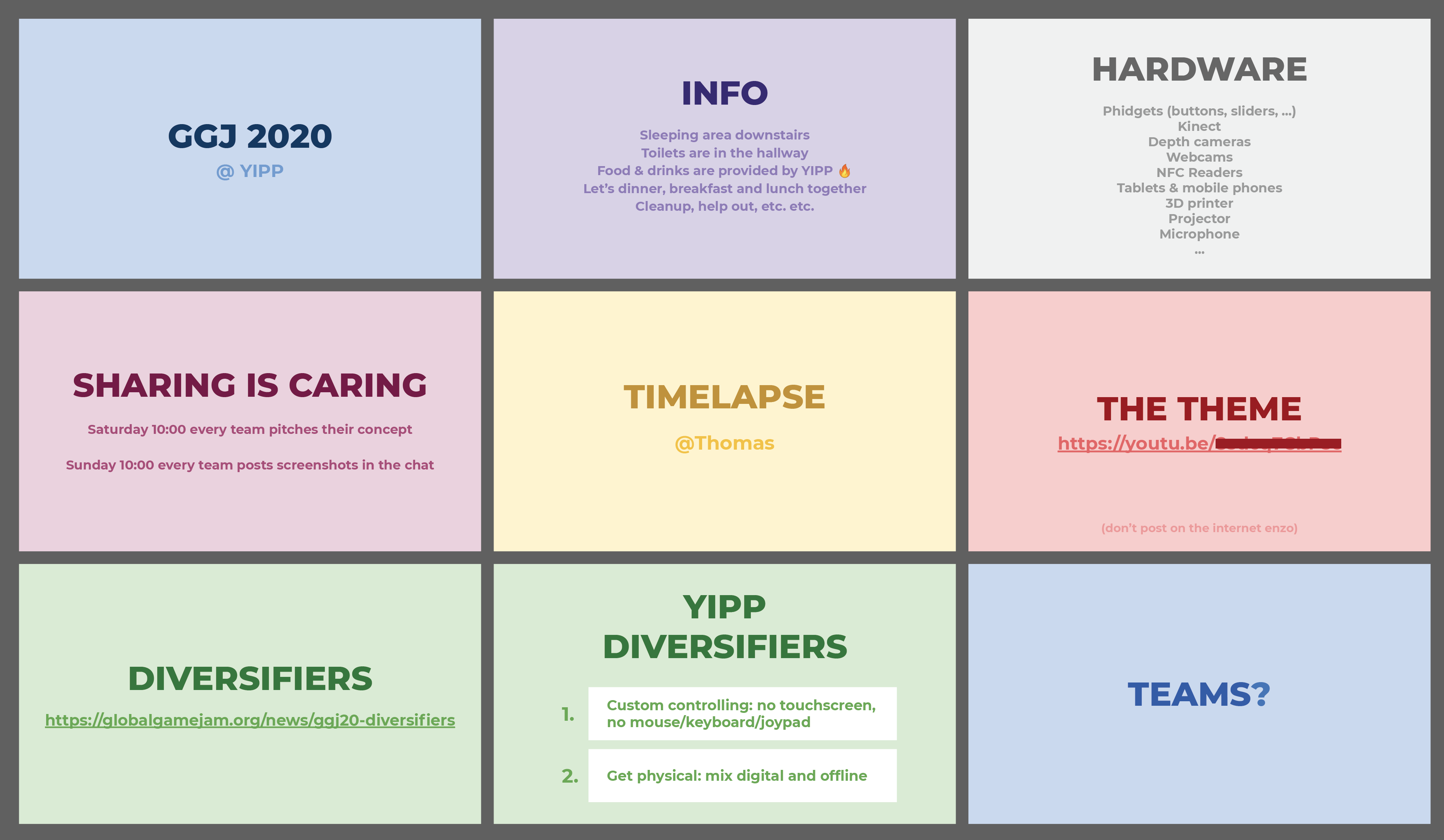 The team of Liam - with Valentijn Dol, Bobbie Goede, Wouter Grin and Paul van Lulling - a veteran team that weathered 5 games jams together counting 3 programmers and 2 game designers and some proficiency either in 2D or 3D art went straight to work. For simplicity they will further on go by Team 2.

A quick alignment on how many teams we should make with the rest of the bunch ended up being 2, and names were pulled to make the distribution as quick and easy as possible: Sasha, Max, Thomas Kole and Abel created one (from now on Team 3), Anna, Ted, Arco and Mike the second team (from now on Team 1).

All in the spirit of “if it ain’t broke, don’t fix it” most of us at one point in their brainstorm session ended up with crazy eights - check last year's post to learn more about it. 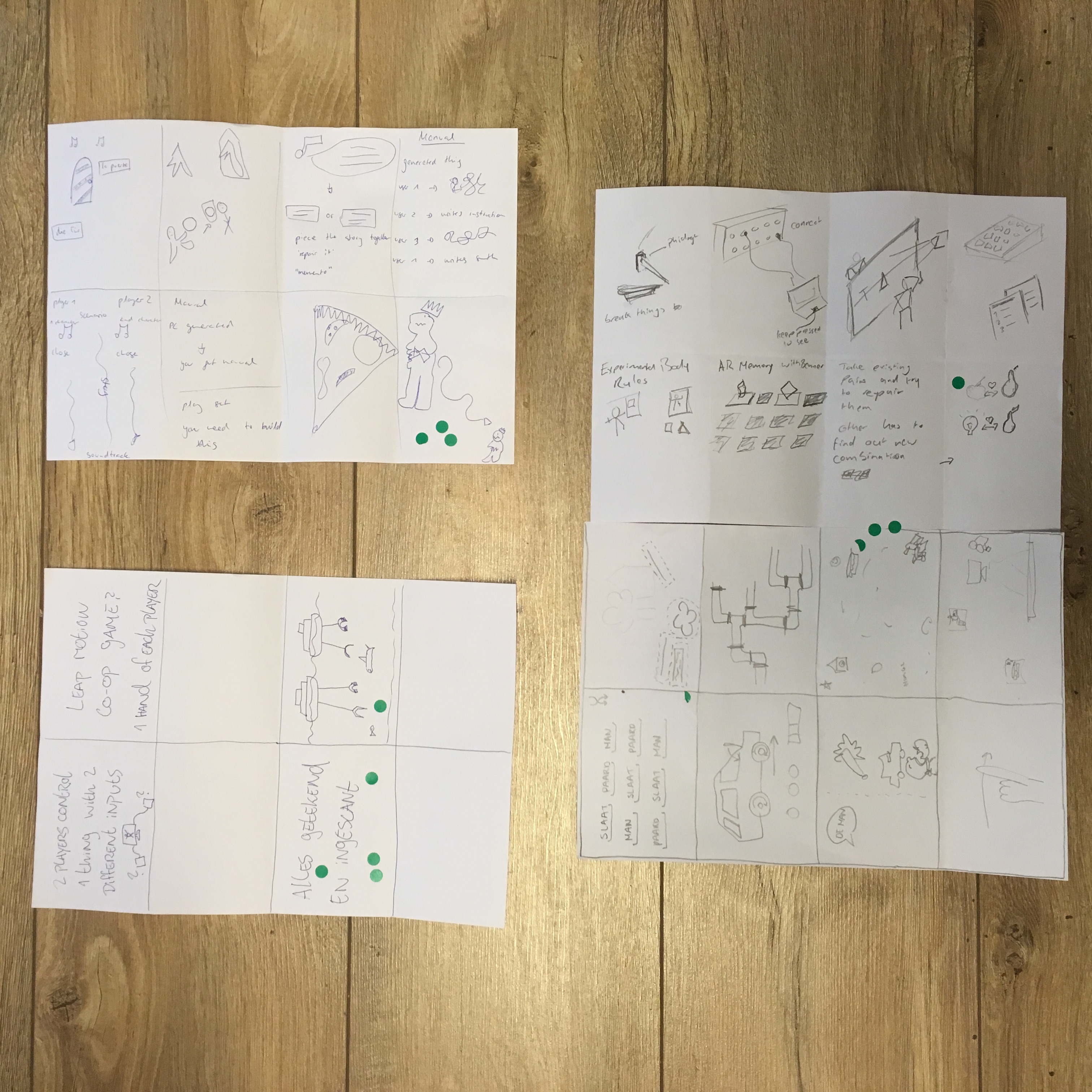 Team 1 quickly decided on having an at least partially non digital game and the overall style in a way that all members could contribute to the creation equally. Furthermore it was chosen not to take a literal approach of repairing objects but going for pairing objects in more than just one way, forcing you to re-pair them afterwards as the first combination does end up in a funny solution but not in the desired outcome. This was not only the case case for objects but also people and their relationships.

Over in the second workroom, which was now a makeshift headquarter for Team 2 a two hour brainstorm session resulted in a single concept which all liked, //Vase Off//. A two player game where the players have to work together to recreate a broken vase. One player has to describe parts of a vase to player 2 who recreates the vase based on the description of player 1. The concept had a lot of potential for comical communication between the players.

Since our site was so central for everybody to get around, most people decided to take the trade off of a short late trip for a comfy bed, leaving only a couple of people back around 1 o’clock at night.

First day in a nutshell

After a - for GGJ standards - long breakfast the 3 teams met to give each other a short pitch of the ways things are going. Even though vague, all ideas were quite different.

Telling our ideas to each other

Going back at it, team 1 went into full production mode, coming up with the story and the levels on the way while team 2 figured out early on that 3 programmers was too much so Liam and Bobbie mostly focused on 3D art and graphics effects while Wouter would program almost the entire game by himself. Valentijn and Paul would next to general game design tasks focus on working out a system for the vases so all parts would fit each other.

The day passed quickly but again for GGJ standards rather chilled. Around lunch time Anna cooked up some pasta for the whole crew and in the evening a handful of us dedicated their time to prepare some awesome wraps.

With full bellies and lots of motivation all teams powered through, resulting in some casualties in Team 3 as Abel got sick and had to throw the towel.

Day 2 in a nutshell

With their approach of getting the story done on the way Team 2 could freely arrange their game to the existing assets and upcoming ideas which made the workflow more flexible but also ended up in multiple discussions as well as compromises in the team. But they weren’t alone, as Team 1 also had quite some heated discussions. All the while Team 3 put it up a gear due to the man down.

The last hours were experienced very differently for all of them: Team 3 was setting up their hardware in the downstairs R&D room of YIPP, Team 1 gathered around Anna’s phone to record as many different sounds as possible and masking and rendering issues would give the last team headaches till literally moments before the deadline. 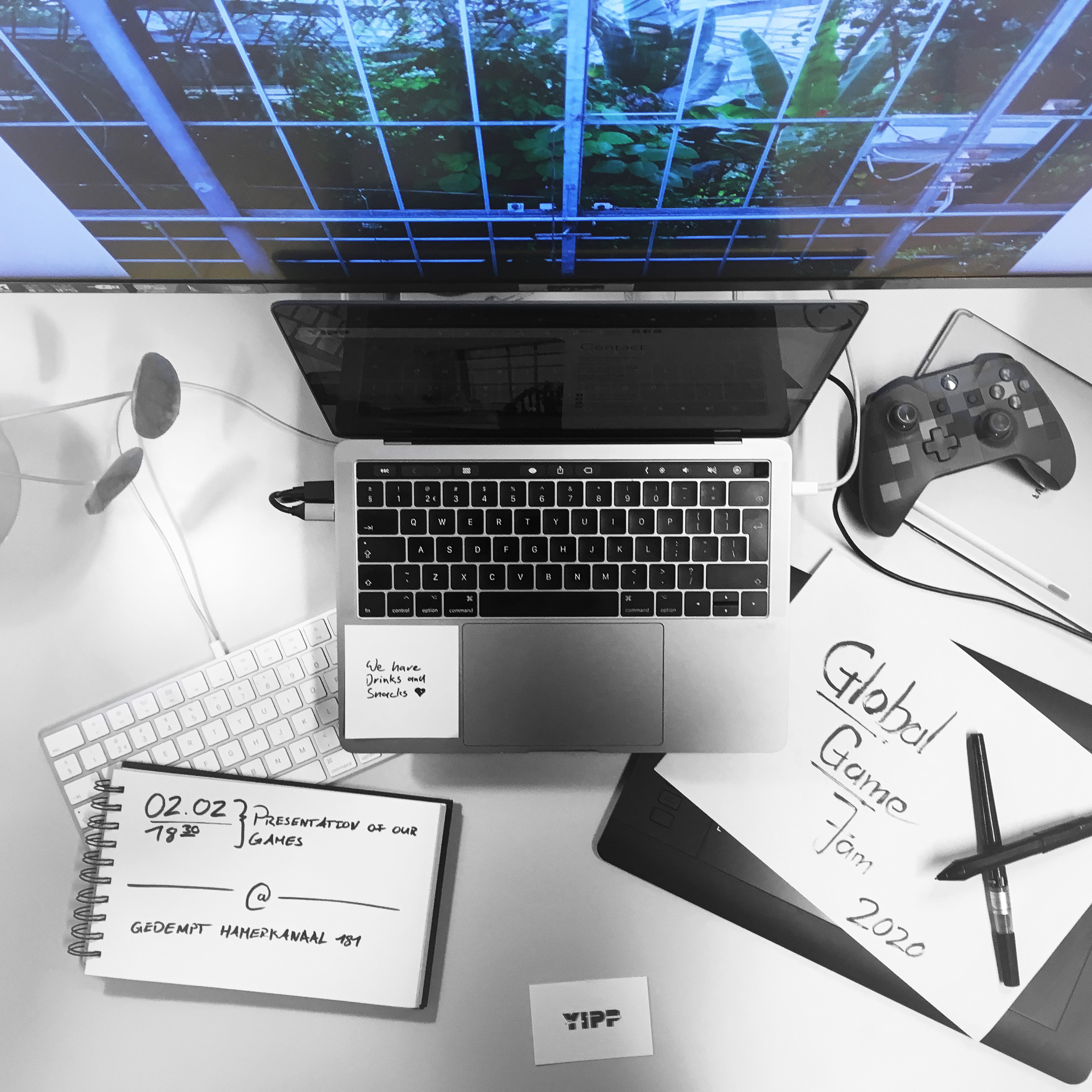 Talking about deadlines. We’ve decided beforehand that similar to the short presentation on Saturday morning that we show each other our results. But this time not only in the small group of just us but also to friends and family. We've sent around an invite before the game jam stating that we would show off our work to anyone interested and willing to come by at 18.30. And we had to live up to our promise of beer and snacks as well. While some started prepping PCs in the conference room and setting up all the hardware needed, others went for a final shopping tour for the weekend to restock on beer and some finger food.

At the end we proudly showed our games to quite a few people.

Day 3 in a nutshell

The fruits of our 48hour labour 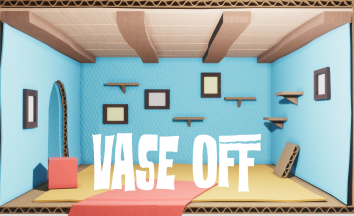 Liam, Valentijn, Bobbie, Wouter and Paul stuck to their initial idea of the communicative 2 player game: The players would stand across each other looking into separate screens. One player would see how the Vase used to look, the other - with help of the keyboard - saw the parts. But not only of that vase, but a giant variety of broken pieces. Under time pressure they have to figure out each part (Bottom, middle, top, pattern and the fitting plant) through talking to each other.

I HAVE NO ROAD AND I MUST SCREAM 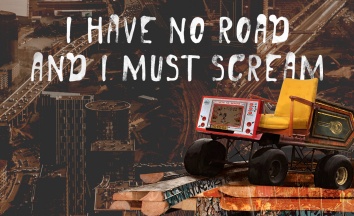 Sasha, Max, Thomas and Abel also used sound but in a very different way: This 3 player game gave each player a single task to fulfill. The end goal is to get a vehicle generated differently each time over a huge pile of trash to the other side by building a bridge. The clue? The “road” pieces have to be screamed to be adjusted - the louder the steeper; the support beams hammered up by hitting a piece of wood with a makeshift hammer attached to a swivel chair which also functioned as the controller to aim the beams; and the most sane interaction of the last person is to turn a wheel as quickly as possible to drive the car. 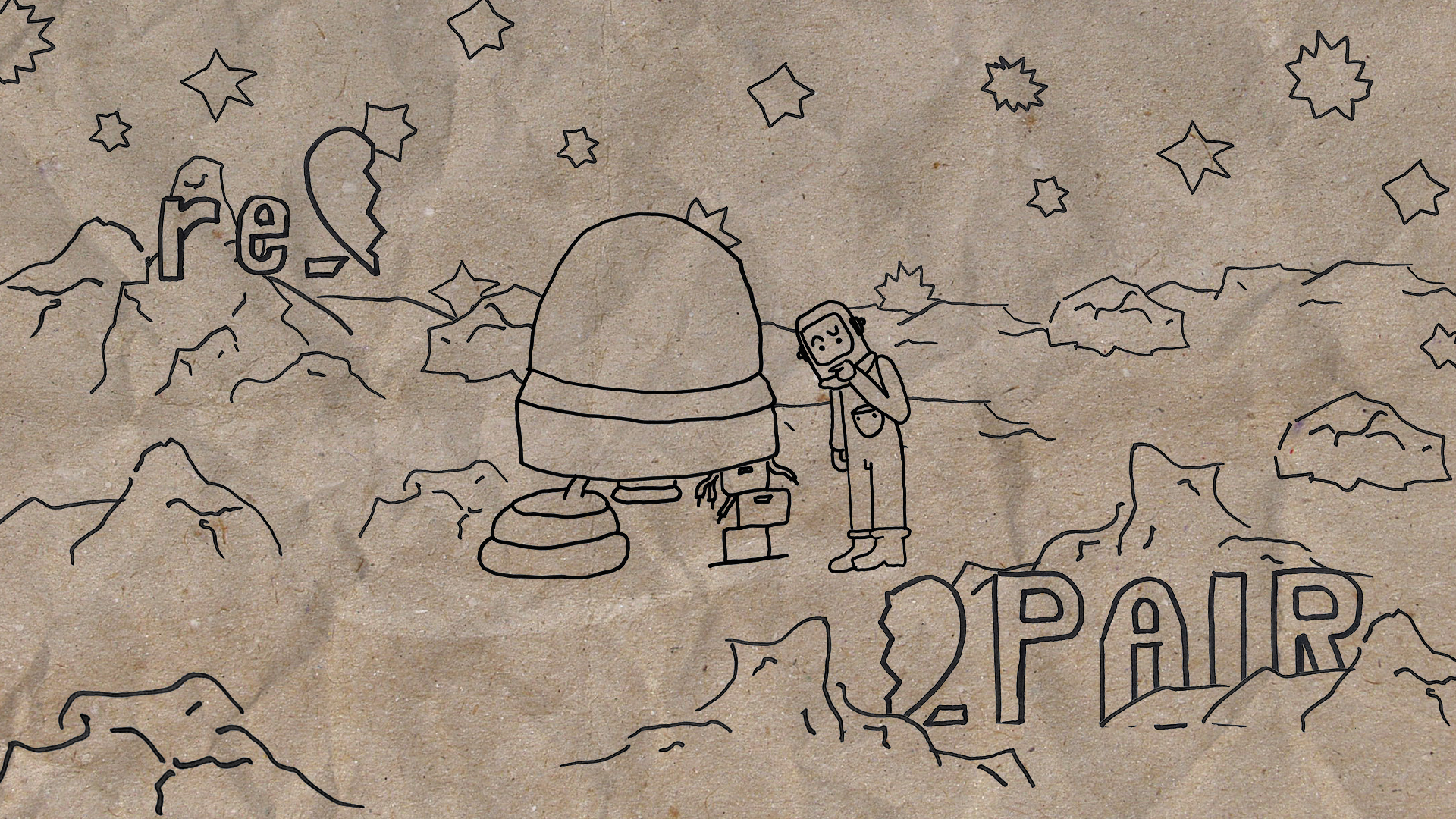 Way calmer is the last game from Anna, Arco, Ted and Mike which is based on a simpler interaction and the hand drawn style. A depth camera sees the the 2 controllers - which make up a heart when brought together - and allows the players to pick up objects on the projection and bring them together. This can either end in a funny result shown as illustration or bring the story further: The journey of an astronaut learning to not only fix physical objects but how sharing can bring relationships between people together as well.