Just like last year YIPP participated in the Global Game Jam, this year with four people. Arco and Max (programmers), Mike (designer) and Thomas (Technical Artist). We’ve got some additional support from Sasha (designer) to help us out with visuals. Since the Global Game Jam location in Amsterdam was already full we took the train to Rotterdam Friday afternoon.

Once arrived at the Jam location in Rotterdam the theme of this year was revealed: “What home means to you”.

As proper YIPP-ers we immediately started of by folding papers to create 8 even rectangles –Crazy eights were on the way. For those unfamiliar with the concept of crazy eights: For each rectangle, you have 1 minute time to draw an idea that comes to your mind to your main subject. After 1 minute, you switch. No matter how far you got. This time pressure makes sure you don’t overthink and after an awkward start (which happens every time) great ideas start to form. After 8 minutes, we present all of our ideas to each other, discuss them and new things form in our head: Time for round 2. 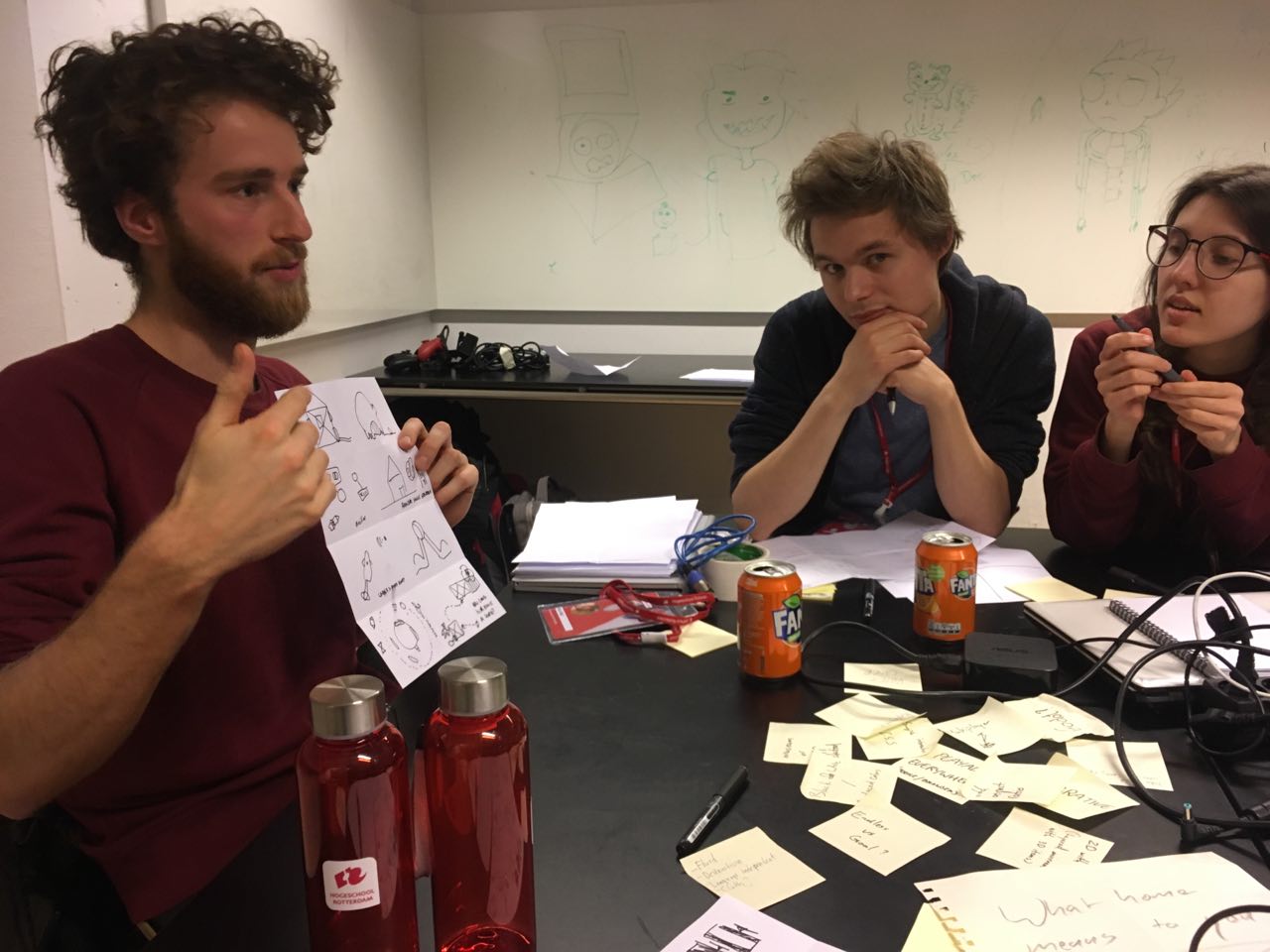 After an intense two rounds of drawing and discussing a whole bunch of different but great ideas we came to the conclusion we needed food. This was a defining point in our process as we decided to go out to eat and get some distance instead of forcing ourselves to try to work as hard as possible.

While we took ourselves out of the GGJ, the GGJ did not leave us so we ended up discussing our findings at dinner as well and came to a conclusion: Everyone of us at one point had an idea drawn out which had to do with animals so we could easily agree on that. In the end we picked the Hermit crab mainly thanks to this great BBC mini-documentary.

Filled bellies and a formed idea later, we went back to our new 48-hour home to set up the digital base. A new project in Git was created, a hermit-pinterest board filled up quickly to define the style and a story started forming. First design experiments were done to further get the style down and Unity was up and running and started being filled with hermit crab code. 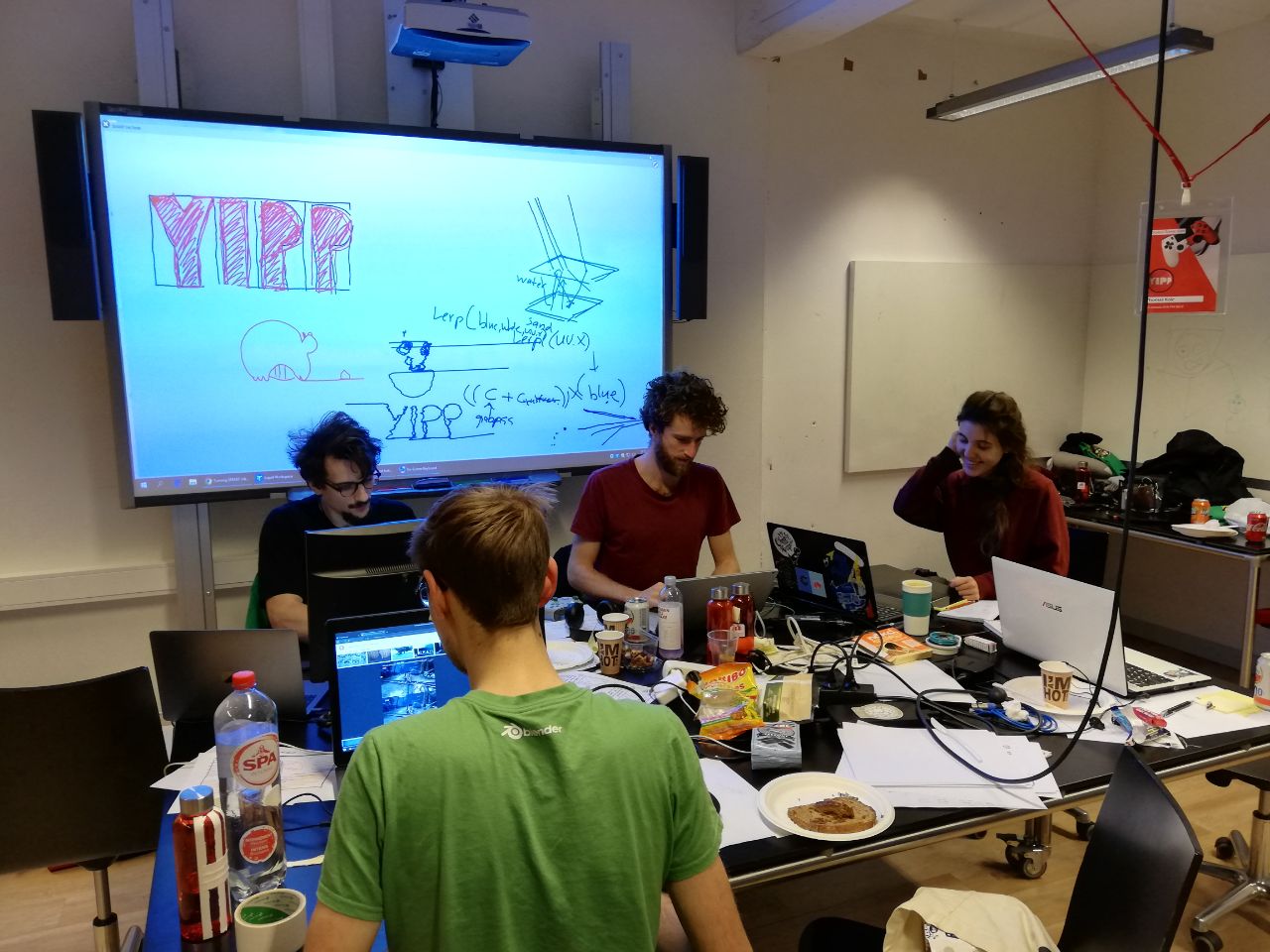 Guerilla marketing - throwing in YIPP wherever possible in the room

The hours passed and the first people started to head of to get some rest, while others stayed back, made a plan of attack for the next day and headed out shortly to see what Rotterdam has to offer.

Day two arrived quickly and our team started firing up their machines with the first rays of sun. 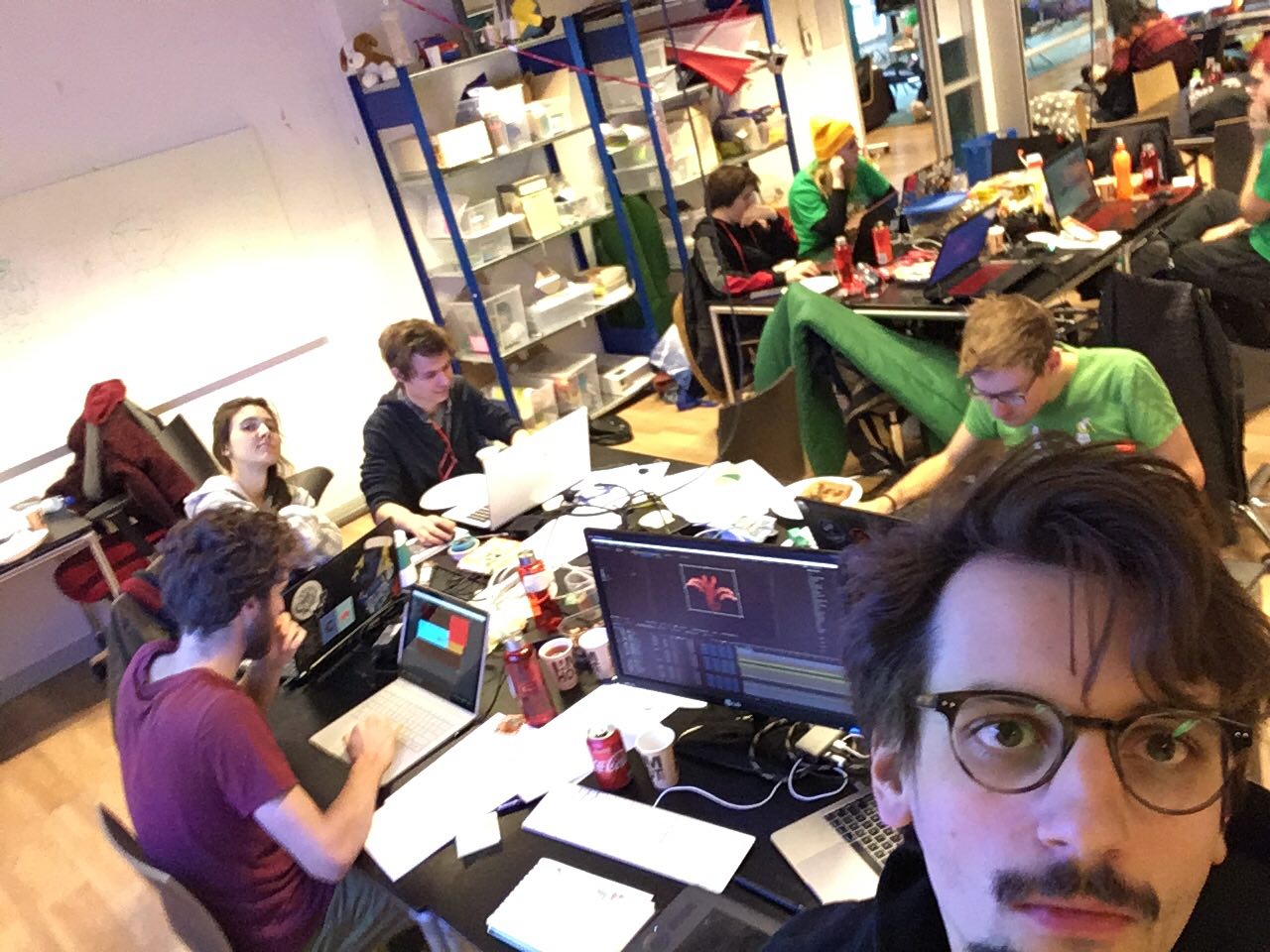 After going through the plan everybody had a clear vision of what needs to be done rather than what is assigned to an individual, creating a very organic working space in our little group. Even though we were constantly communicating, we ended up doing regular stand ups as well, to inform on each others progress and how to move forward. 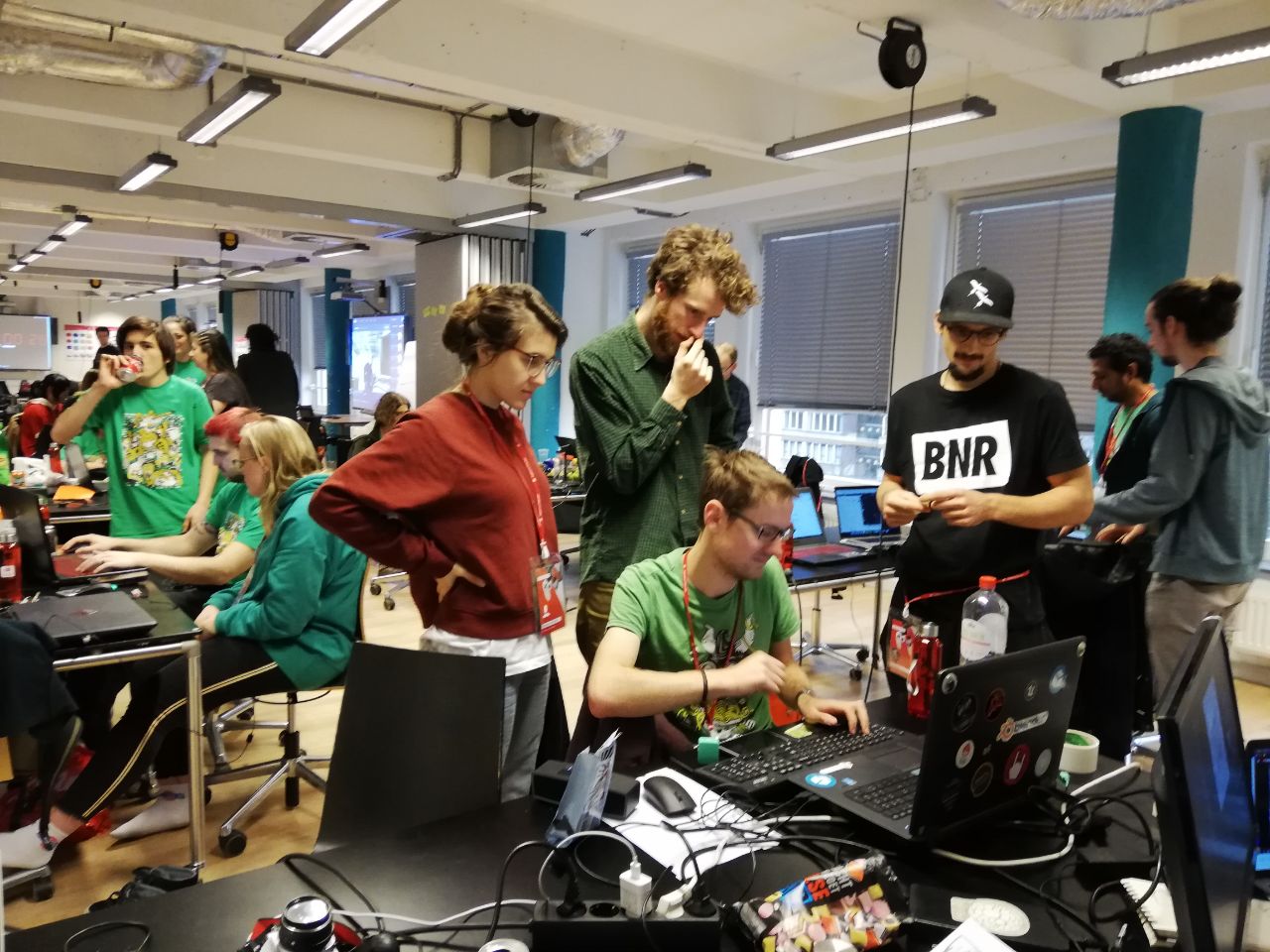 Thomas showing of his awesome water shader. More on that in a seperate post

To sum up the Saturday in one word, it would be “iteration”. The shear amount of thoughts, ideas, code and design assets that went in and back out of the game is mind blowing. Because we worked so organic and under the extremely short time period, it could be that things created would have to be left out due to the fact we changed the way of making it or the story line changed a bit.

Talking about story: this was something we struggled with. Not because we didn’t have a story, but the opposite. The limited amount of time forced us to cut more and more out of our initial story, brining us in constant talks on how to change it and how not to cut out too much.

Late at night, we were all in bed half sleeping, our phones vibrated one last time. On our Telegram chat, where we would share our thoughts and assets, one of us posted the random idea to borrow the voice of Sir David Attenborough from the video which had inspired us in the first place.

This random idea turned out to form the final storyline of our game and gave us another confidence boost for Sunday: Having one of the most iconic voices do our voice over… what more can we ask for? 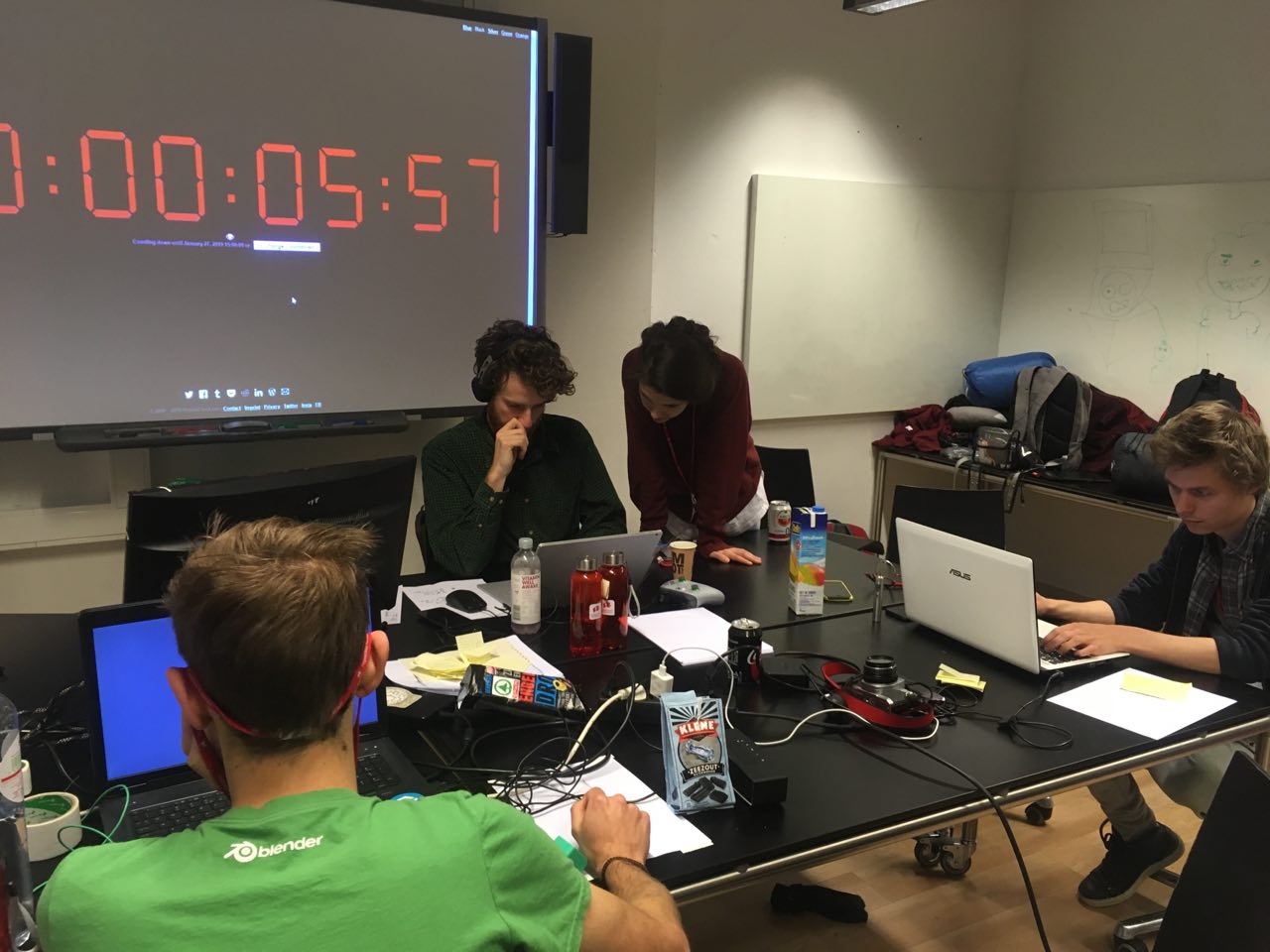 Last 5 minutes, were are so confident we even had time to start cleaning our desks

The Game jam at Rotterdam is set up a bit different than last years in Amsterdam. They did not want to create an environment of contest but of working together and helping each other out. Therefore the deadline was not with judges but in a big room where each team presented their game in front of the other jammers as well as an public audience.

Or sit back and watch a video of the game here: 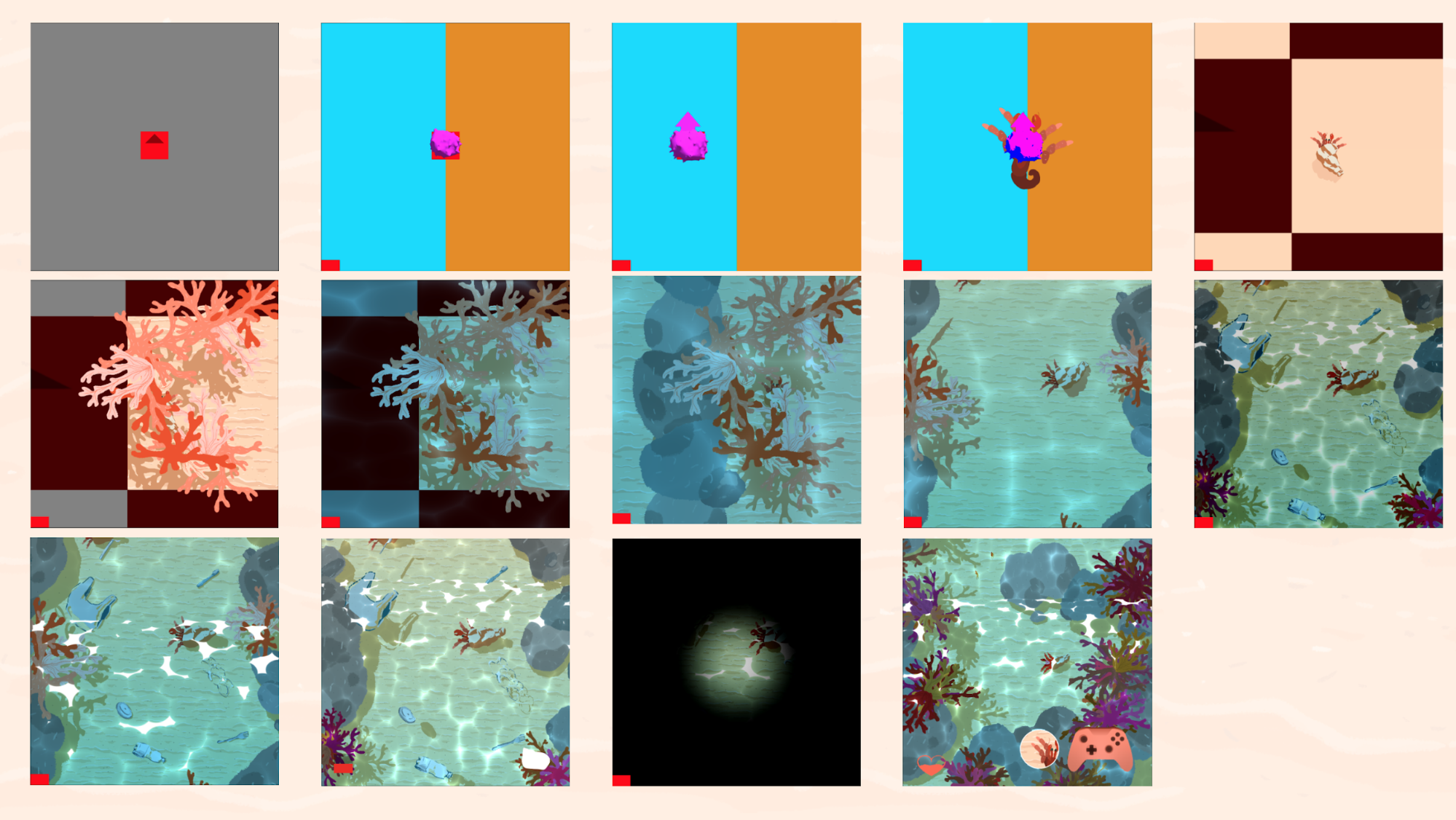 Creation of a hermit crab 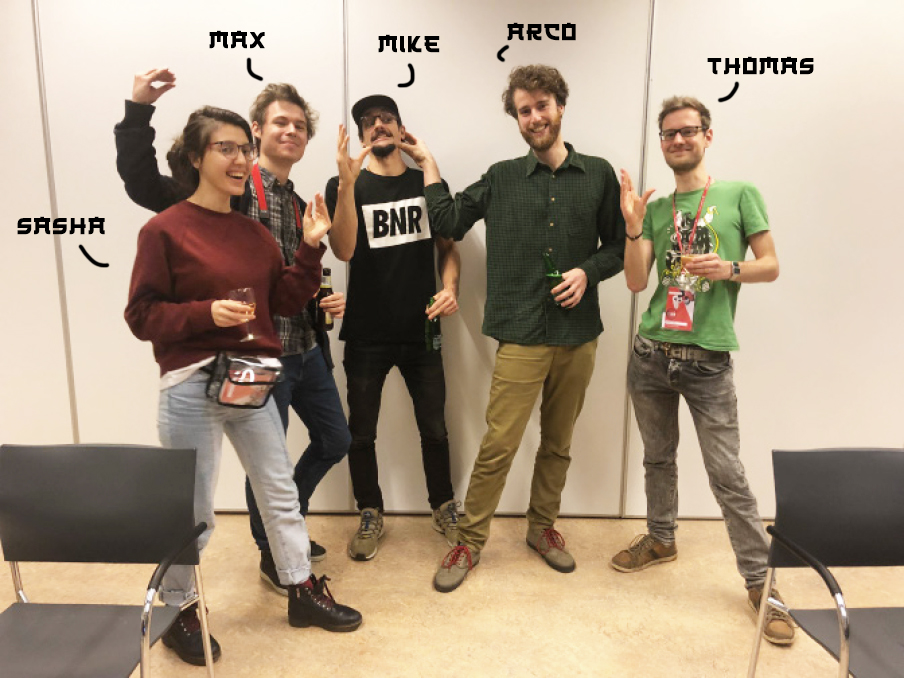 Creators of a hermit crab